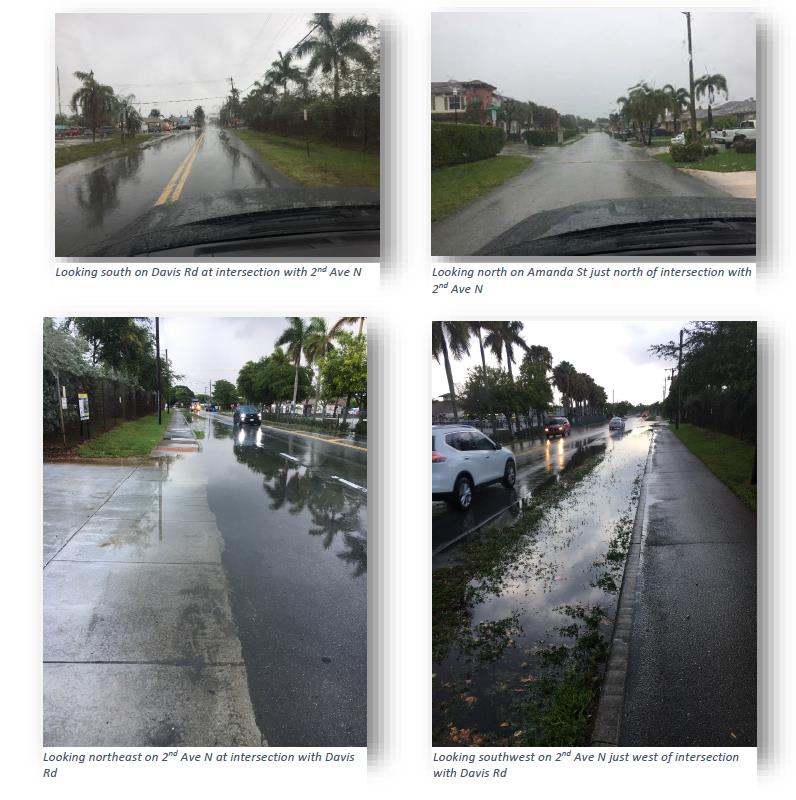 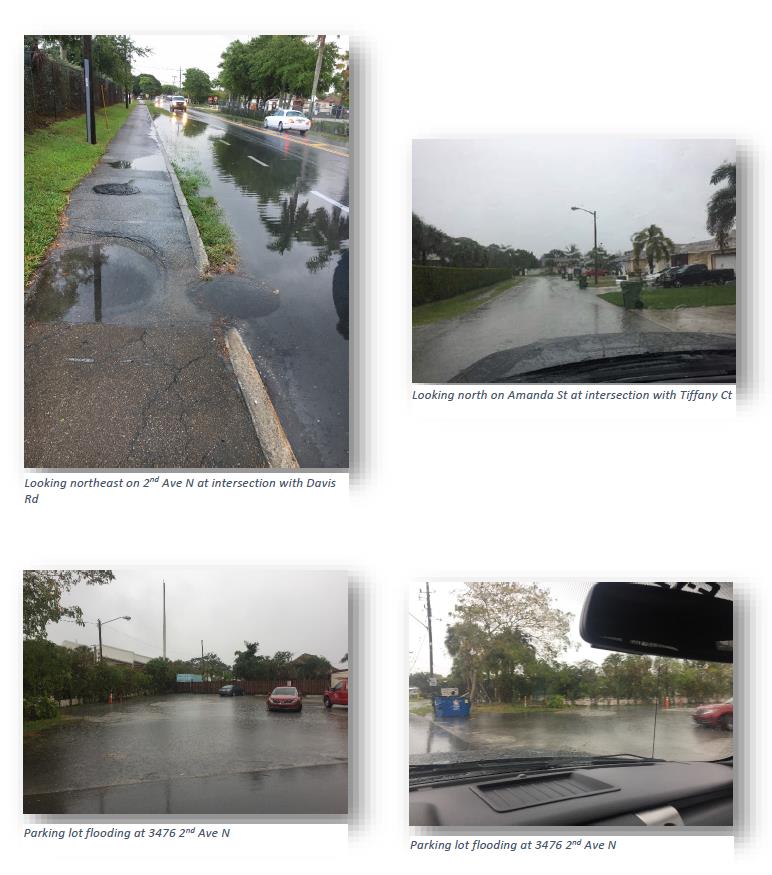 Historically, drainage from this area may have been directed to the LWDD L-12 Canal. Modifications to the regional drainage system and improvements to Lake Worth Road which coincided with a relocation of that canal per FDOT record drawings dated 1960 may have resulted in interruption of several drainage connections, leaving portions of the area along 2nd Avenue North without a dedicated means of positive outfall.

Existing drainage facilities are minimal, and include roadside swales with no clear point of outfall. Some drainage appears to be directed into a private surface water system (Echo Lake) at the intersection of 2nd Avenue North and Davis Road. A drainage ditch runs north and south from Lake Echo to the north side of Lake Worth Road that ultimately ties into the FDOT drainage system via a 15” culvert. The drainage ditch appears to direct stormwater runoff north into Lake Echo but could be used as an outfall south into the FDOT system.

Major drainage features in the area include the LWDD L-11 Canal located approximately 2,000 ft north of 2nd Avenue North, Lake Echo located at the intersection of 2nd Avenue North and Davis Road, and the LWDD L-12 located between 1,350 and 1,500 ft south of 2nd Avenue North. The LWDD L-12 canal was originally located along the south side of Lake Worth Road. In 1960, roadway improvements by FDOT included relocating the L-12 approximately 1,250 ft south of its previous location. Based on review of the 1960 record drawings, it appears that the L-12 was a major drainage feature for properties on both sides of Lake Worth Road. Cross-drains were installed in 1960 to provide drainage for areas on the north side of Lake Worth Road with connections that extended south to the relocated L-12 canal. Widening of Lake Worth Road undertaken in 1979 included consolidation of the cross-drains which were routed south through lateral canals and/or piping to the L-12. From review of more recent SFWMD permits, some commercial developments along Lake Worth Road may have utilized or altered some of the cross-drains.

Upon review of the FDOT record drawings for Lake Worth Road a drainage pipe was constructed approximately 600 feet east of Davis Road. Based upon FDOT records, this pipe was designed to allow 34.2 acres north of Lake Worth Road to drain through the system, 13.65 cfs. Upon review of SFWMD permit information and site investigations, this culvert appears to be blocked and inaccessible. On April 18, 2018 a meeting was held with FDOT to discuss the options for positive outfall. FDOT agreed to work with the Village and provided the design calculations used to determine the capacity available for the area. FDOT indicated that they would allow the Village to tie into the existing Lake Worth Road drainage system, upsizing as necessary, to discharge into their system as originally intended and ultimately to the LWDD L-12 Canal.

There are proposed improvements that the Village is planning on installing that would connect the existing catch basins at Miller Road to the existing Village system that connects to Lake Echo.

A drainage area study was conducted to establish drainage boundaries for tributary areas along 2nd Avenue North and determine the point of outfall. There are several SFWMD permits (ERP) within this area that were considered in establishing the drainage basin boundaries that include:

1) Marbella at Palm Springs, Application No.060227-13, issued to Buena Vista Homes of the Palm Beaches, Inc. (“No-Notice General Permit      for Activities in Uplands”)

9) Pine Needle Park Subdivision, Permit No. 80-00167-S, Application No. X000006535, issued to Continental Development Corporation, which includes the southern portion of ERP No. 5 from above (“Exemption”)

Lake Echo should be evaluated further to determine if this lake is truly a private lake system. If it is determined that Lake Echo is a public lake, several improvements along the lake banks should be considered including bank stabilization and retaining wall repairs.

Discharge from this area will outfall to the LWDD L-11 Canal. Approval by the Lake Worth Drainage District will be required prior to construction. For properties which may discharge to the Lake Worth Road drainage system, approval by the Florida Department of Transportation will be necessary. SFWMD approval of updated drainage calculations or design drawings may be required for projects where discharge to the LWDD L-12 Canal has been affected by the installation of Lake Worth Road.

The estimated cost of improvements for 2nd Avenue North is $1,220,000.  A detailed Opinion of Probable Construction Cost, Schematic Design drawing, and Drainage Area exhibit are attached. 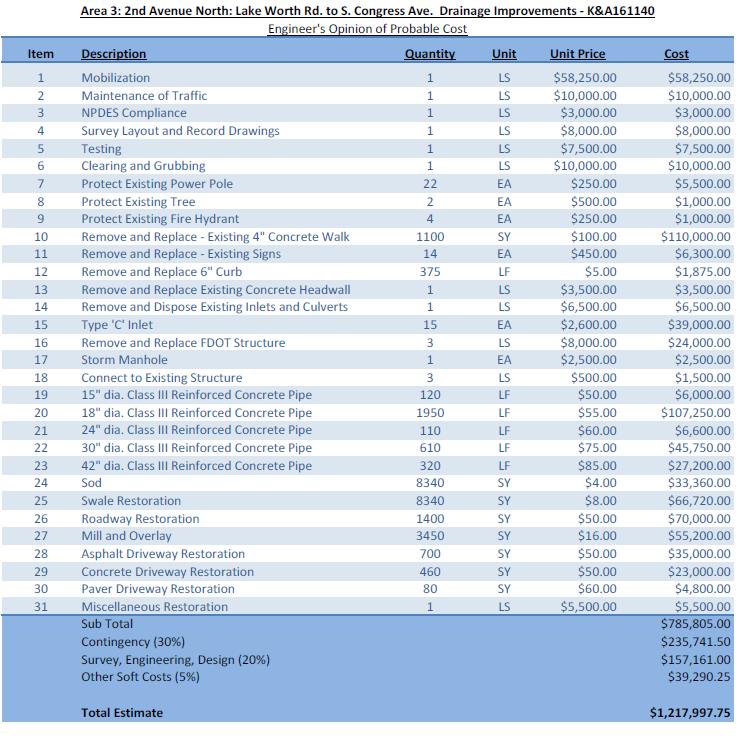