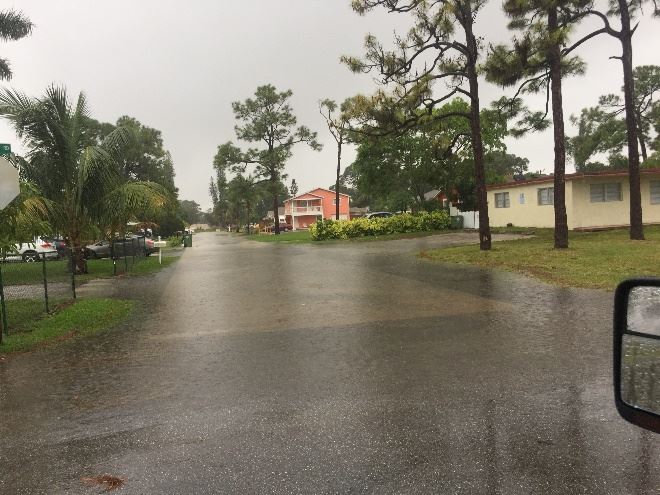 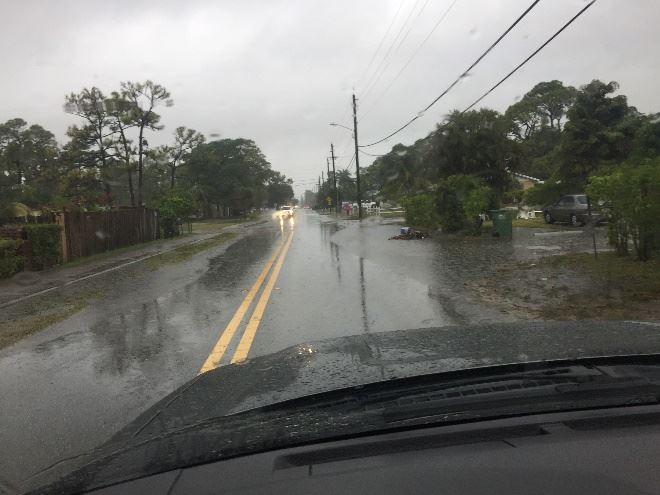 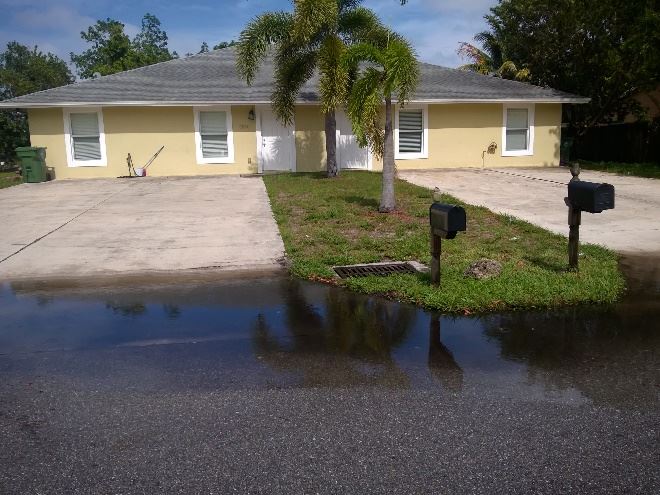 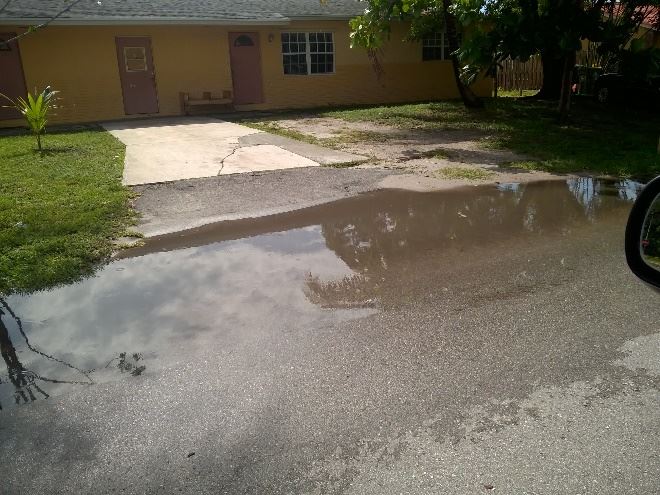 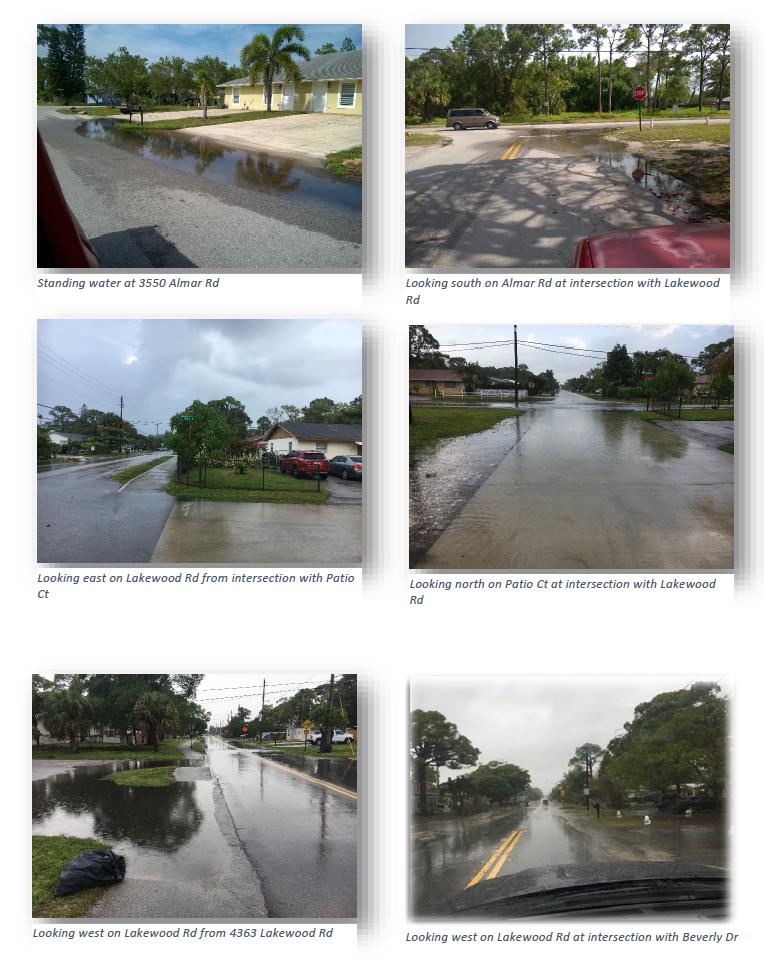 GIS data for existing stormwater management features in the vicinity include catch basins, pipes, swales and ditches without a clearly defined drainage system or connection to a point of outfall. Upon review of record from several sources, field observations and survey acquisition we were able to get an understanding how the existing drainage system within the area functions.

The limits of the Village’s responsibility begin with a drainage ditch connecting to the LWDD L-11 Canal, approximately 950’ west of Kirk Road. There are 5 roadway drainage systems with outfall to this ditch before the southern limits near Lakewood Road where there is a 42” drainage culvert tied into the Lakewood Road and Laurette Lane Drainage systems (described below). The Village’s system extends south between 42nd Avenue South and Kenyon Road via a 36” CMP culvert to just north of the US Post office. At this location, the US post office has a direct, uncontrolled, piped discharge the Village’s system which then continues west, through the northern portion of the Home Depot property via a 36” RCP culvert and into a drainage ditch west of 43rd Drive South. Catch basins from 43rd Drive South that tie into this system at this location. The ditch then continues west approximately 660’ to a junction with another Village drainage swale that extends north to Lakewood Road providing conveyance for the commercial buildings at 4400 Charlotte Street, residential properties off of Patio Court and the western limits of Lakewood Road. The ditch continues west 330’ (150’ west of the terminus of Price Street) then extends north to Charlotte Street. Both Charlotte Street and Price Street have connections to this system.

The Lakewood Road drainage system runs east to Kirk Road with direct connections from Beverly Drive, Wisconsin Street and Keyon Road. The Lakewood Road drainage system runs west to 43rd Drive South with catch basins located at the intersection of 43rd and Lakewood. No catch basins were found along 42nd Avenue South in either the GIS data or during field observations of the area.

Existing SFMWD permits which may be impacted by drainage system alterations in this area include:

There are two options for providing positive outfall to alleviate the standing water issues at this location:

1. Install catch basins along the south side of Lakewood Road and connect to the existing drainage system along Lakewood Road towards     the west that discharge south into the Village swale as previously described.

2. Install catch basins along the south side of Lakewood Road and connect to the existing drainage system within Patio Court, north of   Lakewood Road.

Option 2 is the desired option, as stormwater runoff for Option 1 would have to travel 2,600 feet further than Option 2 as it would have to route south, east, then north before reaching the L-11 Canal. Option 1 is only considered as the actual ownership of the drainage system along Patio Court is not definitive.

For the purposes of this study, Option 2 is presented as it the most effective solution and the costs for both options would be similar for budgetary purposes.

In addition to the added catch basins south of Lakewood Road, we are recommending that the swales along Patio Court are restored and two additional catch basin, with cross drains, are installed along the east side of Patio Court.

There is a proposed residential development located south of Lakewood Road at this location,Lakewood Apartments. This drainage issue was presented to the developer and they have included provisions in their construction plans to regrade the swale along the south side of

Lakewood Road to direct runoff into the existing catch basins located at the intersection with 43rd Drive South.

The Price Street Drainage system that ties into the Village ditch is full of sediment and debris.This sediment may have been caused by recent utility improvements along Patio Court that involved open cutting the west side of the roadway. The outfall for this system is a bubble-up structure where sediments become trapped. We recommend removing the sediment within this system and consider reconstructing the outfall into the existing drainage ditch or making improvements to the outfall structure to allow discharge at a lower elevation.

The Village has requested pricing for an option associated with piping the canal from Lakewood Road to Canal Road for approximately 1,200 LF. There are a few concerns that will need to be considered prior to piping the canal, such as mitigating floodplain storage and potential groundwater recharge. These considerations could impact the cost associated with piping this canal, the size of the culvert, if exfiltration is required, etc. As such, the Village should consider further investigation of this option. Without further analysis, and based upon similar piping 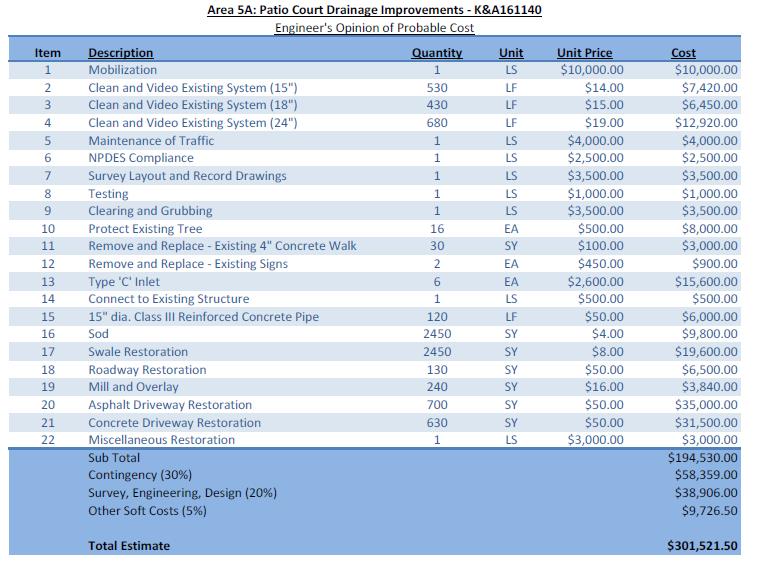 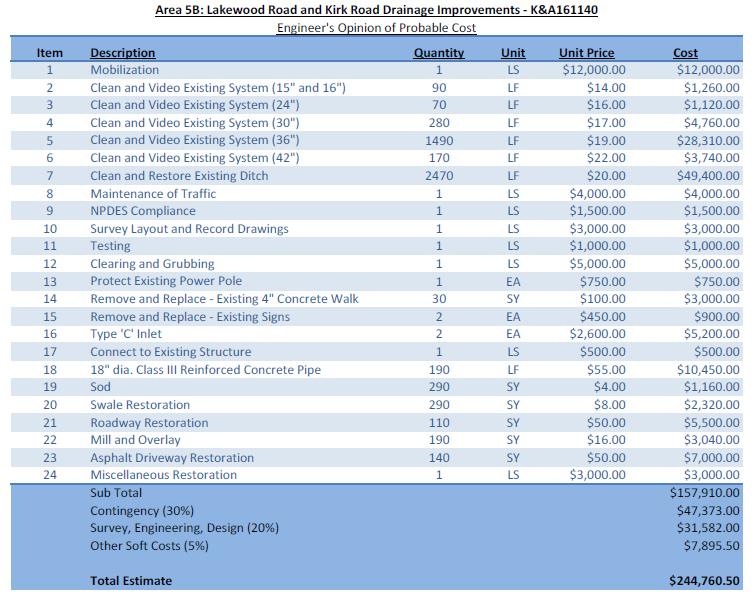