Lake banks are steep with grade breaks in close proximity to a public pedestrian walkway. Increased lake levels have been observed following rain events with no apparent positive outfall. 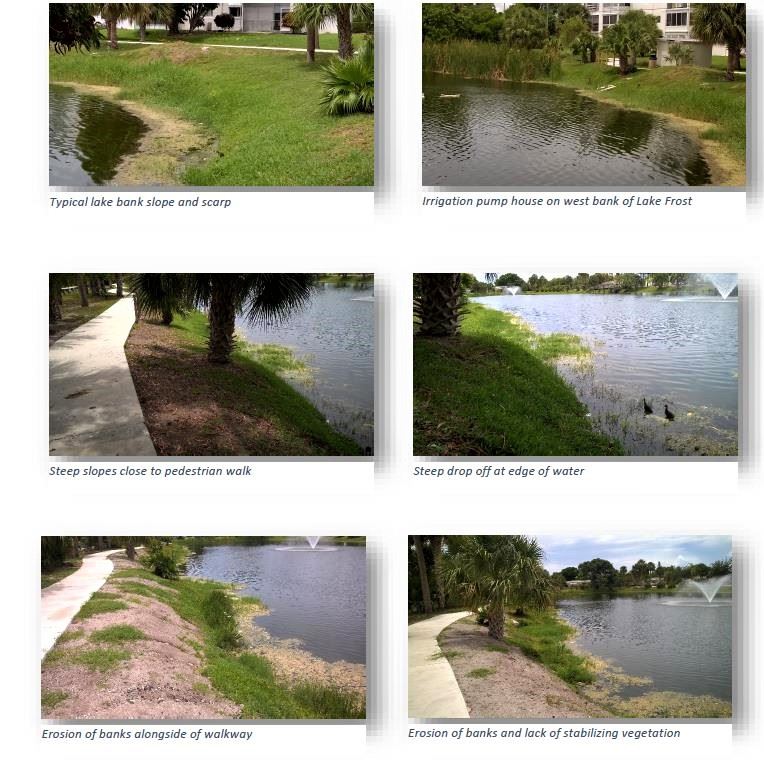 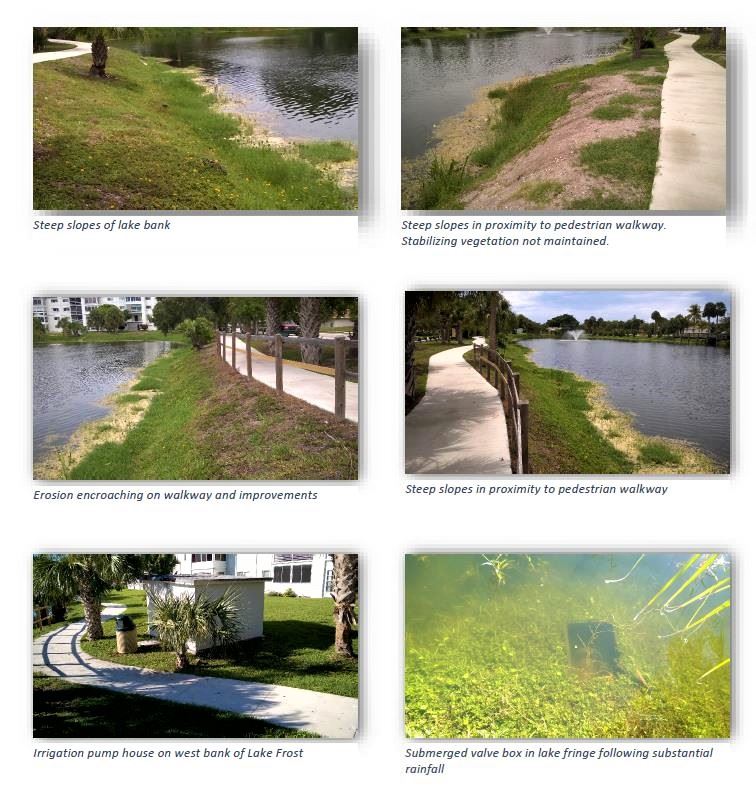 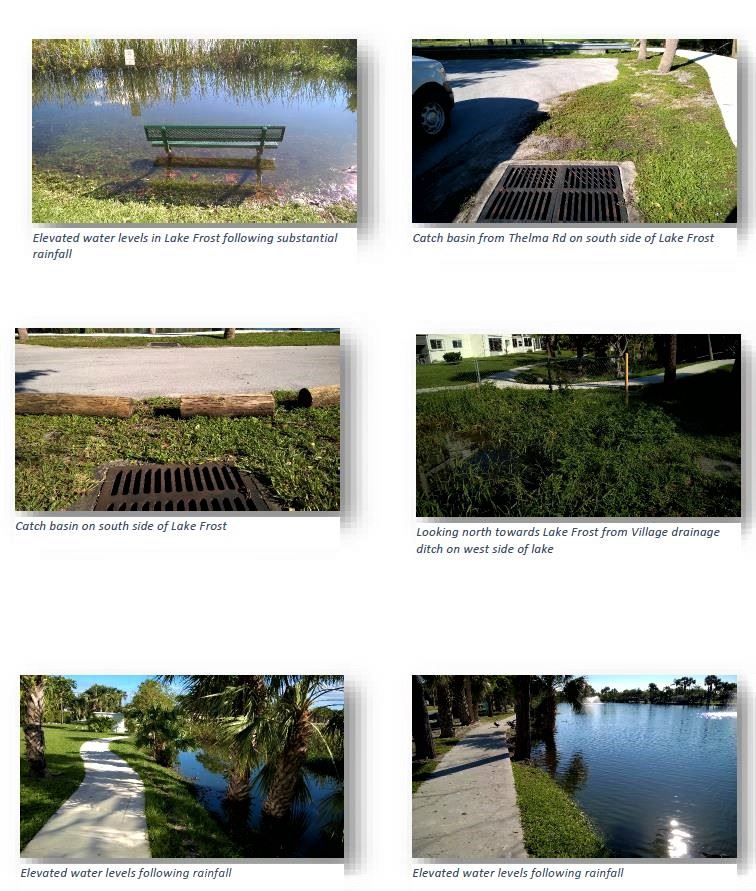 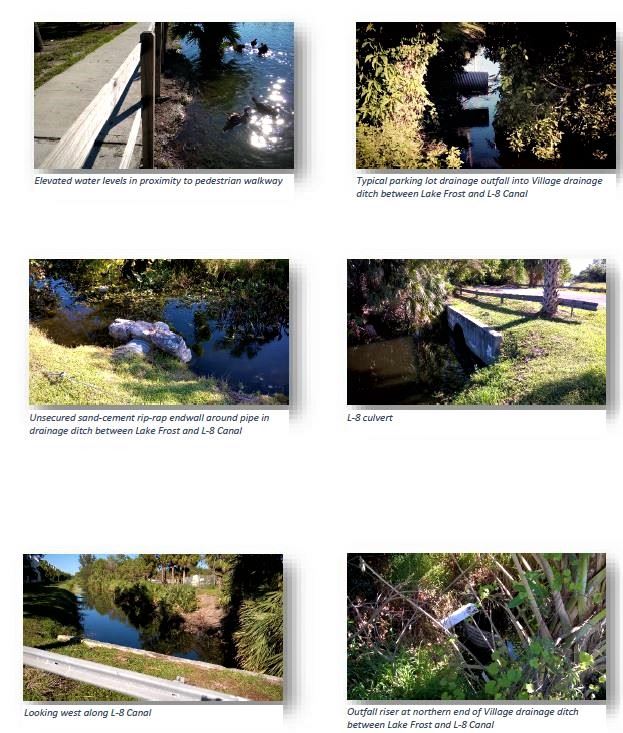 Banks along this lake appear steep and likely exceeded the minimum SFWMD requirements of a 4:1 horizontal:vertical slope. Overly steep slopes can represent a risk to the general public, may be subject to greater degrees of erosion, and can be more difficult to maintain than shallower slopes. An outfall from the lake was not apparent during the first few field investigations. A survey crew was sent to the site in attempt to find an outfall. The survey crew followed the Village drainage ditch from the LWDD L-8 Canal south to Lillian Drive. Along the north side of Lillian Drive, a 21” culvert was found, heading south towards Lake Frost. Along the south side of Lillian Drive a yard drainage and 15” HDPE was found. A soft dig of the area south of Lillian Drive was conducted and the 15” HDPE was found discharging into the existing 21” culvert with no direct connection to Lake Frost.

From discussions with Village Staff, it is our understanding that there were sidewalk improvements conducted in the past that may have resulted in accidentally burying the 21” culvert. No official record of the modification was found during preliminary research, which may have essentially severed the outfall connection for Lake Frost.

SFWMD SWM Permit No. 50-02419-S, Application No. 900510-9, issued to the Palm Beach County Board of County Commissioners, covers nearby Thelma and Dobrow Roads and outfalls to Lake Frost and ultimately in to the LWDD L-8 Canal. The permit documents indicate that the lake was originally designed with a 2:1 (horizontal:vertical) slope, whereas the standard is a 4:1 slope.

Restoration of the outfall connection to the canal on the west side of the lake is necessary. Replacement of the existing HDPE culvert with a 24” RCP should restore the historical outflow capacity.

The schematic design shows installation of a control structure and culvert to pass flow from Lake Frost north to the L-8 Canal via an existing drainage ditch. This drainage ditch should be investigated for the ownership and maintenance responsibilities; if it is not owned by the Village, then it should be taken over or an agreement made with the owner to protect the Village’s drainage needs. An irrigation pump on the northwest corner of the lake may have to be relocated to avoid a conflict with the proposed outfall.

As a future consideration, a second phase is proposed for the Lake Frost drainage system improvements. The Village should consider re-shaping and/or reinforcing the existing lake bank slopes to address long-term maintenance, operation, and safety considerations. Extending the existing slopes to meet the criteria of the SFWMD would result in a decrease of storage capacity, which should be evaluated and estimated prior to commencement of lake bank improvements.

Discharge from Lake Frost will outfall to the LWDD L-8 Canal. Approval by the Lake Worth Drainage District will be necessary prior to construction.

The estimated cost of improvements for the Lake Frost outfall reconstruction is $85,000 and the future phase for the reconstruction of the lake banks is $445,000. The combined total for outfall and lake bank improvements is approximately $525,000. Detailed Opinions of Probable Construction Cost and a Schematic Design drawing are attached. 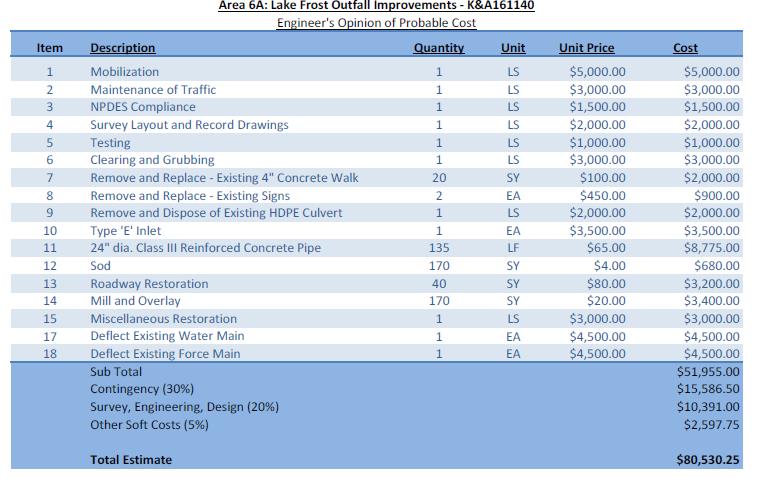 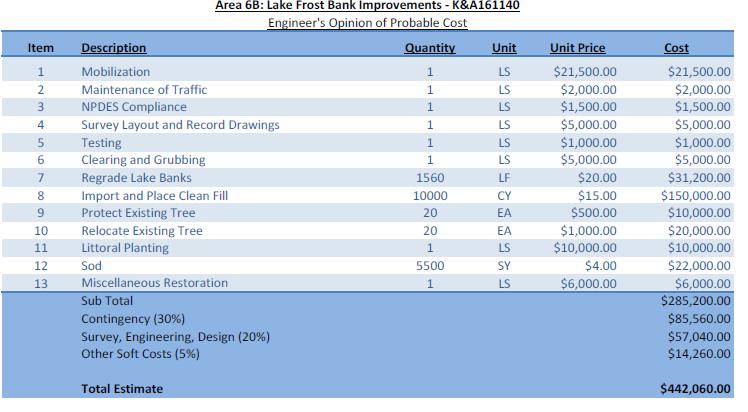