Standing water conditions have been observed in the roadway and swales during minor rainfall events. 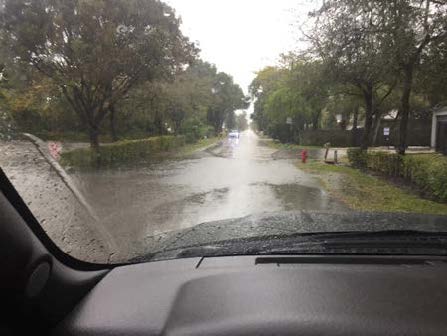 There are existing swales, as depicted from the GIS information, running north and south along the east and west sides of the roadway. The swale areas appear to be relatively flat without a consistent flow line. There are separate basins within the Gulfstream Road drainage area between Lake Worth Road and 10th Avenue North which are described as Basins 6A, 6B and 6C for the purposes of this study.

Basin 8A, the southernmost basin from Lake Worth Road to south of Lakewood Road, includes catch basins midway between Lakewood Road and Lake Worth Road located approximately 620’ north of Lake Worth Road. These catch basins are located in a 10’ drainage easement which extends west to Serubi Avenue and east to Davis Road. There appears to be a drainage divide in the swale system east of Gulfstream midway between Gulfstream and Coconut. An existing 24” CMP culvert runs south from the catch basins on Gulfstream Road to an existing inlet located on the north side of Lake Worth Road where a 24” RCP connects to the FDOT drainage system and ultimately to the LWDD L-12 Canal. From research and coordination with FDOT, it was determined that this 24” RCP culvert through the FDOT system was designed to drain a large portion of this area (55.27 acres, 22.11 cfs).

Basin 8B is located from the LWDD L-11 Canal north to 10th Avenue North. This portion of Gulfstream Road has swales and a series of catch basins and pipes with an outfall in the LWDD L-11 canal. Standing water was observed in the roadway just south of 10th Avenue. The stormwater runoff did not appear to convey within the swales to the nearby catch basins.

Basin 8C is located between Lakewood Road to the south and the LWDD L-11 Canal to the north. There were no reported drainage issues in Basin 6C, nor were such issues observed during field inspection along Gulfstream Road. No additional study or analysis was performed in relation to Basin 8C.

Improvement of swale sections to increase conveyance to the existing catch basins is recommended to address the drainage concerns within the three basins. Basin 6A should include additional improvements this basin includes as direct connection to the Lake Worth Road drainage system as 22.11 cfs was intended to discharge through this system. Please see the FDOT record drawing and storm tabs included within the section of the report. The existing 24” CMP found along the west side of Gulfstream Road should be replaced with a 24” RCP to maximize capacity from this portion of the Village to the intended outfall system. This basin should also be considered for future modification to potentially include additional stormwater runoff east of Gulfstream, up to Davis Road.

FDOT and LWDD approvals will only be required for Basin 6A.

The estimated cost of proposed improvements are as follows:

Detailed Opinions of Probable Construction Cost for each section of roadway and a Schematic Design drawing are attached. 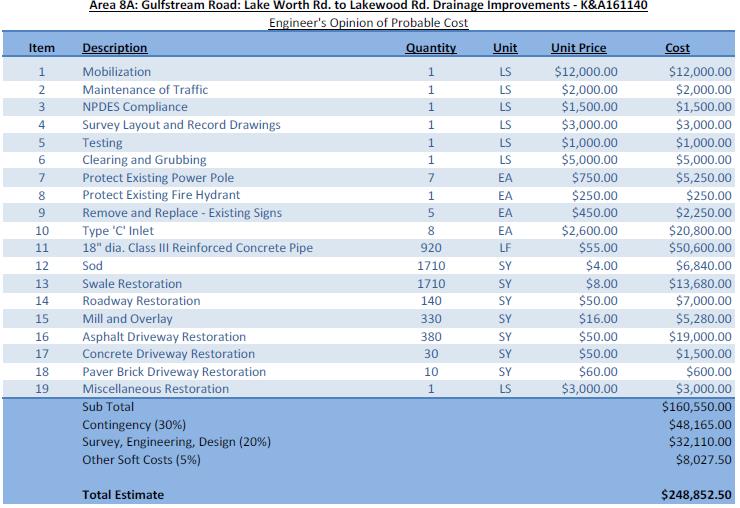 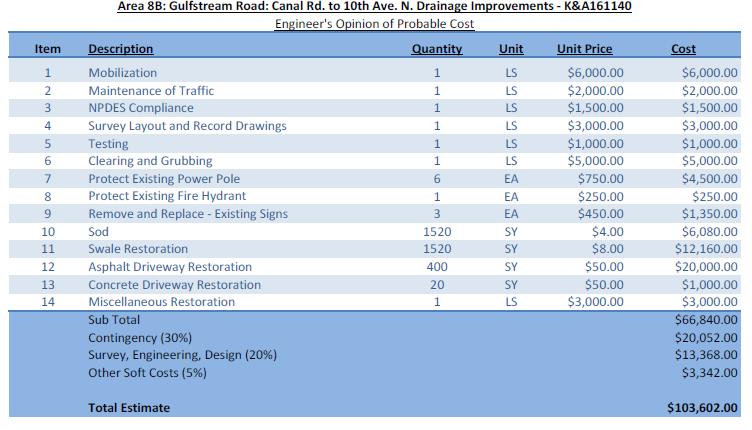