Localized standing water conditions have been observed along the east side of Davis Road during minor rainfall events.

The drainage system along the west side of the road was recently improved in 2014; Davis Road Storm Drainage Improvements (Eckler Engineering). There used to be a deep ditch with steep slopes located along the west side of Davis Road. This ditch was filled in and replaced with a larger diameter culverted system with an outfall into the LWDD L-11 Canal. There is a control structure at the outfall with the minimum 6”x 6” inverted triangular bleeder. The record drawings and drainage calculations, provided by the Village, were reviewed, based upon the drainage calculations the drainage area for the Davis Road drainage system is only 2.53 acres.

Upon review of plat information within the area an existing drainage easement was found along the south side of Montante Boulevard. This easement contains a drainage swale that extends west all the way to Serubi Avenue, however based upon the LiDAR information there is a drainage divide within this swale along the west side of Coconut Road. The record drawings for the Davis Road Storm Drainage Improvements installed in 2014 depict the existing swale with a culvert connection into the existing Davis Road ditch at elevation 11.71 and installed a catch basin replacing the culvert at elevation 13.44.

Catch basins should be installed along the east side of Davis Road at lower areas. The east side of the roadway may need to be regraded to direct stormwater runoff to these culverts and could require the installation of curb and gutter. The catch basin that was installed along Davis Road at the south side of Montante Boulevard should be reconstructed to the pre-construction configuration.

Due to the large diameter culverts along the west side of Davis Road, we are recommending extending the Davis Road Drainage system south beyond to include and go beyond the intersection with 2nd Avenue. This will include the installation of catch basins, swales and pipes as depicted on the schematic design.

There is another opportunity to provide an outfall for Lake Echo, located just west of Davis Road. As described in the proposed Improvement Project No. 1 for 2nd Avenue, there is only limited capacity available for discharge into the Lake Worth Road drainage system, so an outfall from Lake Echo into Davis Road would help with the drainage issues associated with that area as well. A 10’ drainage easement was found in the center of Lake Echo north through the Village owned park located along the east side of Davis Road. A drainage system could be extended from Davis Road through the park site and into the existing drainage easement that could provide relief and positive outfall for Lake Echo.

The drainage permit with LWDD should be revisited to include the actual contributing area for the Davis Road system as well as the proposed added areas. The control structure for the system should be redesigned to maximize the allowable discharge accordingly.

Discharge from these areas will outfall to the LWDD L-11 Canal. Approval by the Lake Worth Drainage District will be necessary prior to construction. Application to SFWMD for retroactive approval of the existing Davis Road system will also be required.

The estimated cost of drainage improvements for Davis Road between 2nd Avenue North and Canal Road is $905,000. A detailed Opinion of Probable Construction Cost, Schematic Design drawing, and drainage area exhibit are attached 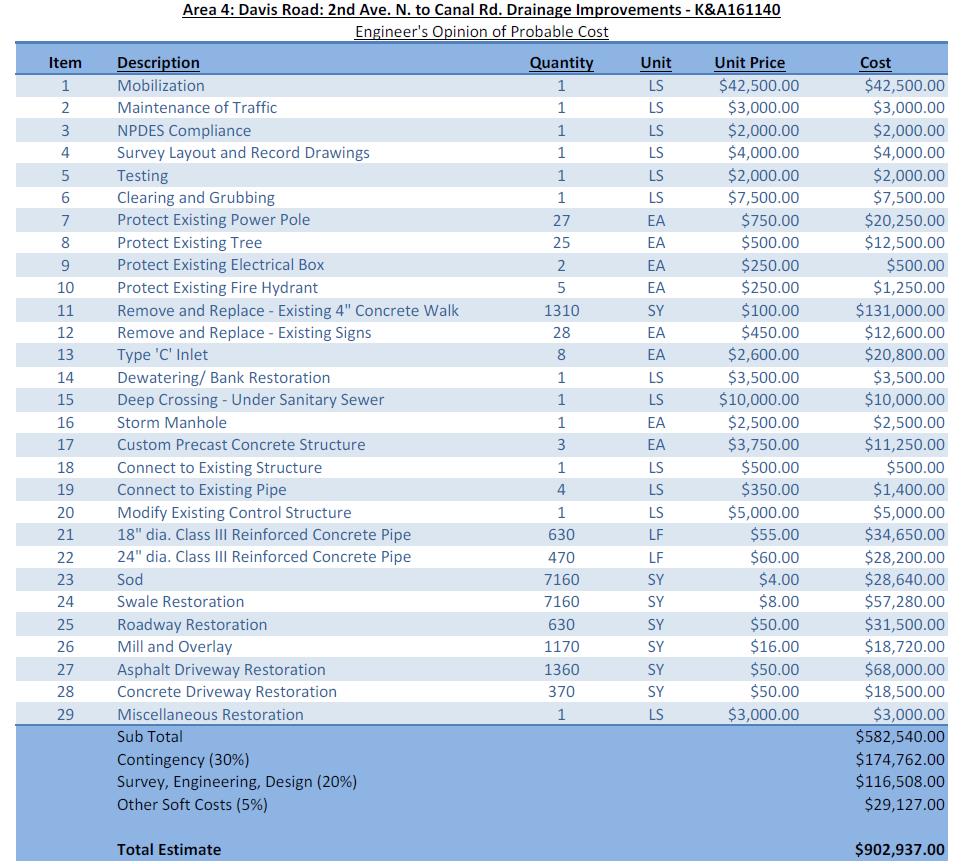