Standing water conditions have been observed along the shoulders of the roadway affecting vehicle access to public parking spaces.

Area Photos: No photos of the issue are available at this time.

To the west of the affected area, catch basins was found at the intersection of Davis Road and Alemeda Drive. The catch basin along the southeast corner included a stub-out, potentially for the expansion of the Davis Road drainage system. Davis Road’s drainage system has a direct connection to the LWDD L-9 Canal toward the south.

LiDAR information suggests that Cypress Lane south of Alemeda Drive is slightly lower than Alemeda Drive and the municipal complex to the south.

The proposed improvements include the installation of a stormwater collection system within Cypress Avenue with a connection into the Davis Road drainage system. Connection to the existing system along Davis Road is the most cost-effective option for routing excess storm water collected along Cypress Lane to a positive outfall. A hydraulic analysis of the existing Davis Road system was conducted to model the system with and without the addition of runoff from the affected portion of Cypress Lane. The existing Davis Road drainage system was modeled with an FDOT zone 10 3-year rainfall event assuming a 30-minute time of concentration, based upon current roadway design standards for similar systems. Based upon the results of the model, the existing roadway drainage system does not meet current design standards and therefore an exfiltration trench system has been proposed for the Cypress Avenue drainage system improvements. There are no reported drainage issues within areas connected to the existing system, which suggests that soil percolation is good within the existing swale system along Davis Roads. The exfiltration trench system will retain stormwater runoff from Cypress Lane and then allow discharge to the Davis Road system after the peak conditions of the storm event.

The schematic design drawing for Cypress Lane shows proposed catch basins to be installed along the east and west sides of the roadway for collection of runoff. These catch basins will be connected to a trunk line along the west side of the roadway. Existing paved parking areas on the west side of the road will be resurfaced to direct runoff to the catch basins. Poured curb will replace borders around tree islands currently formed by concrete wheel stops. Disturbed pavement should be milled and overlaid with new asphalt following installation of subterranean features to provide a smooth finished road surface.

Discharge from Cypress Lane north of the existing municipal complex and south of Alemeda Drive will outfall to the LWDD L-9 Canal. Approval by the Lake Worth Drainage District will be required prior to construction.

The estimated cost of improvements for Cypress Lane is $310,000. A detailed Opinion of Probable Construction Cost, Schematic Design drawing, and a depiction of the drainage basin are attached. 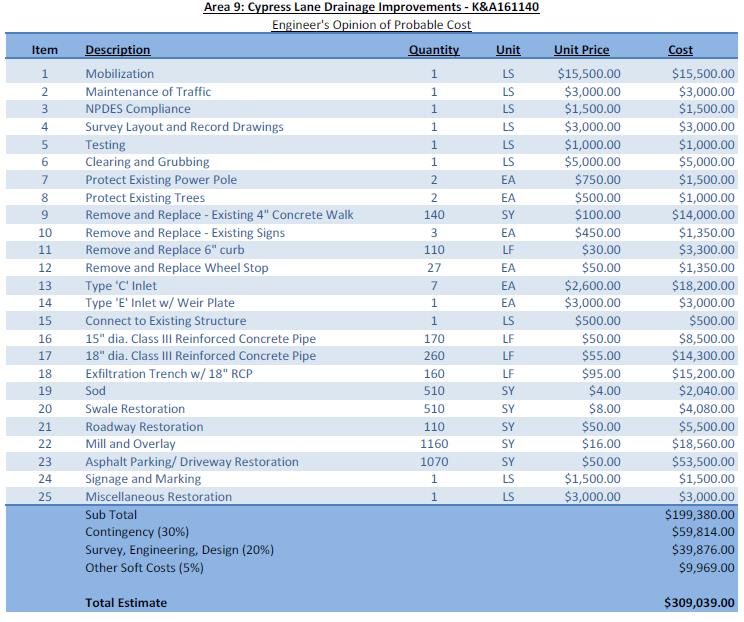