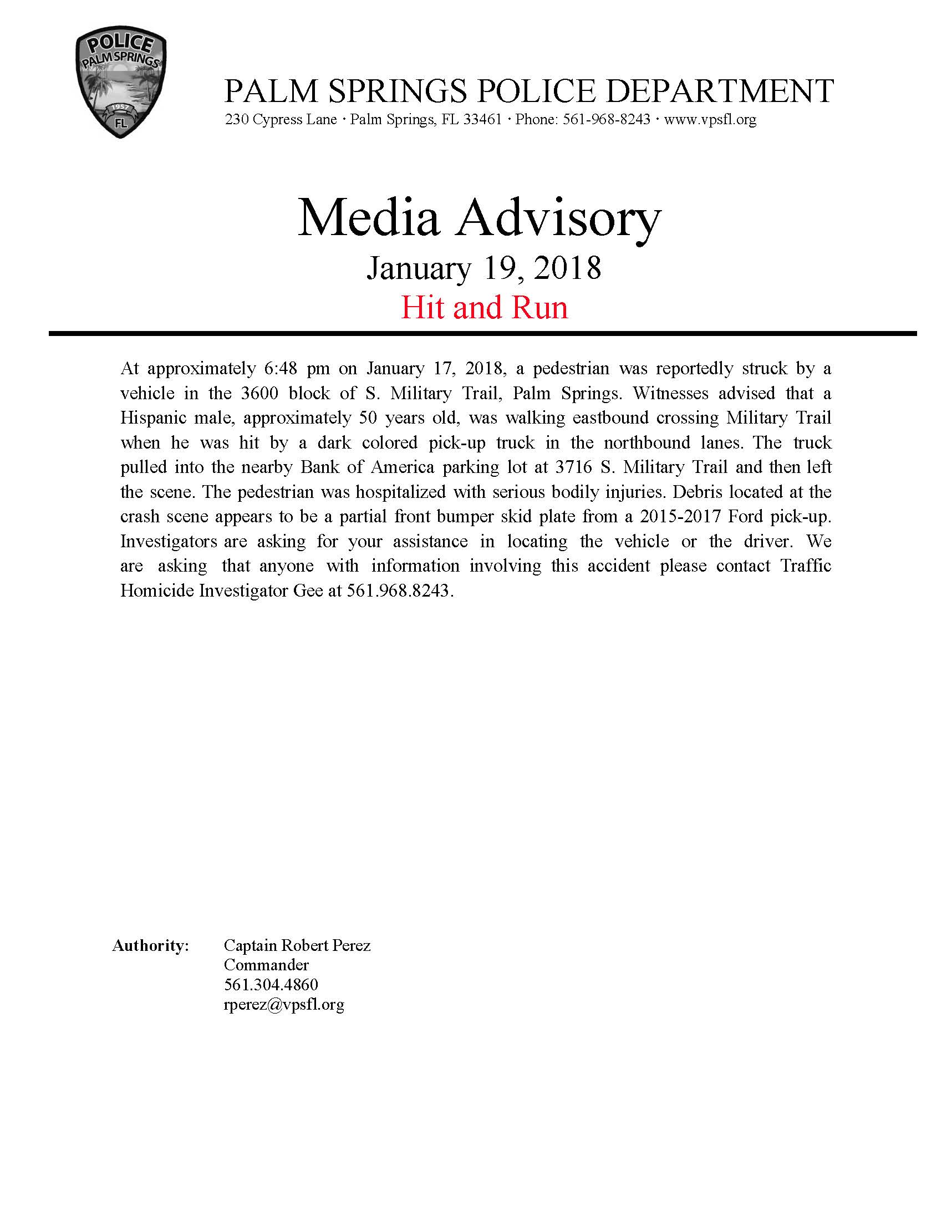 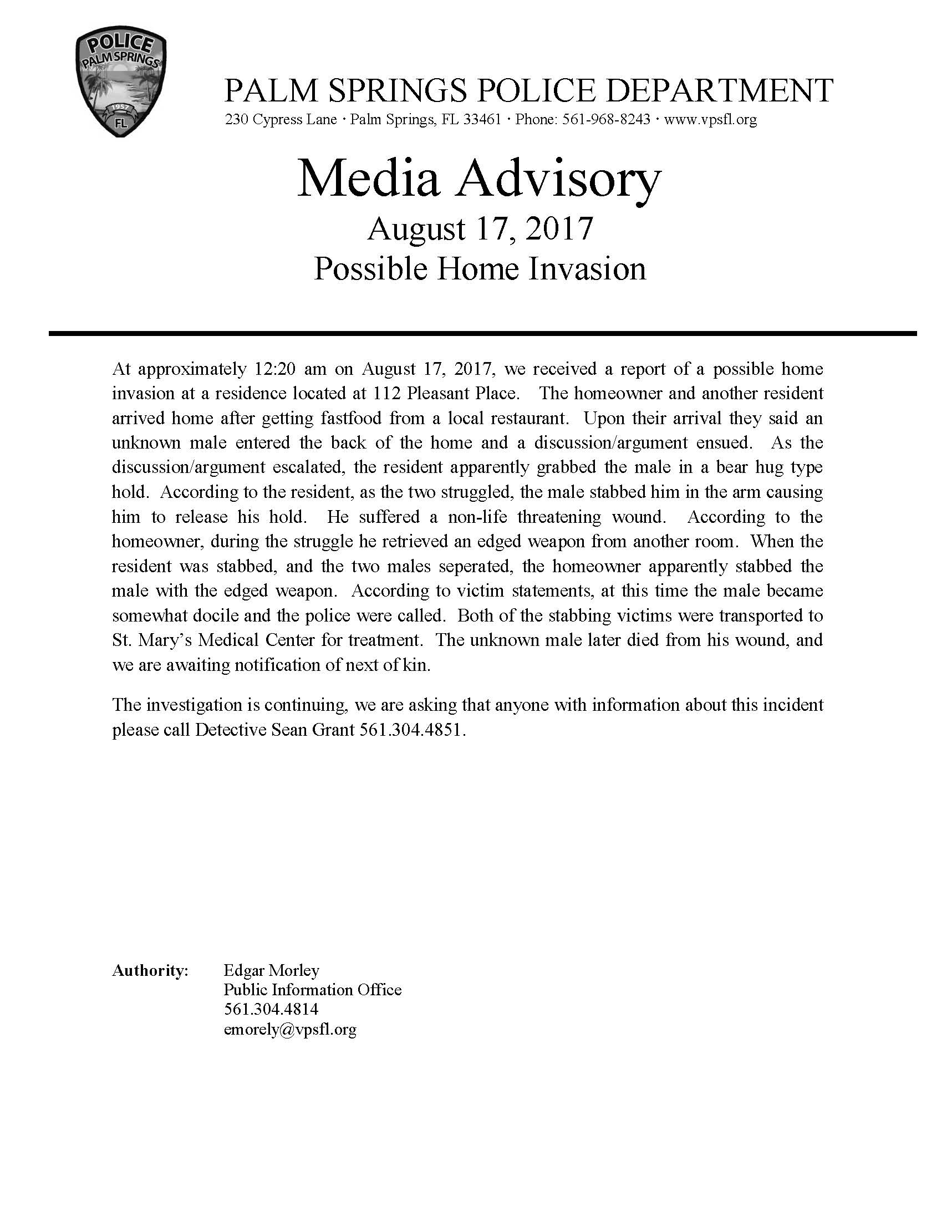 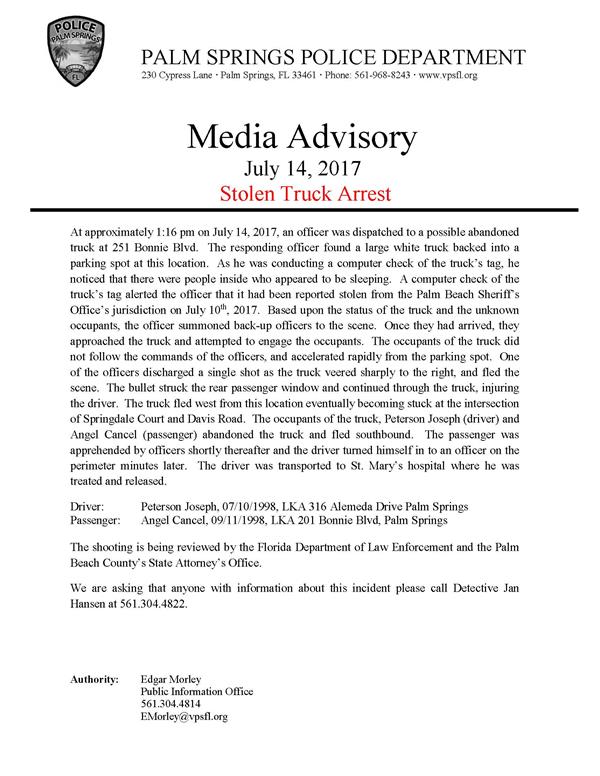 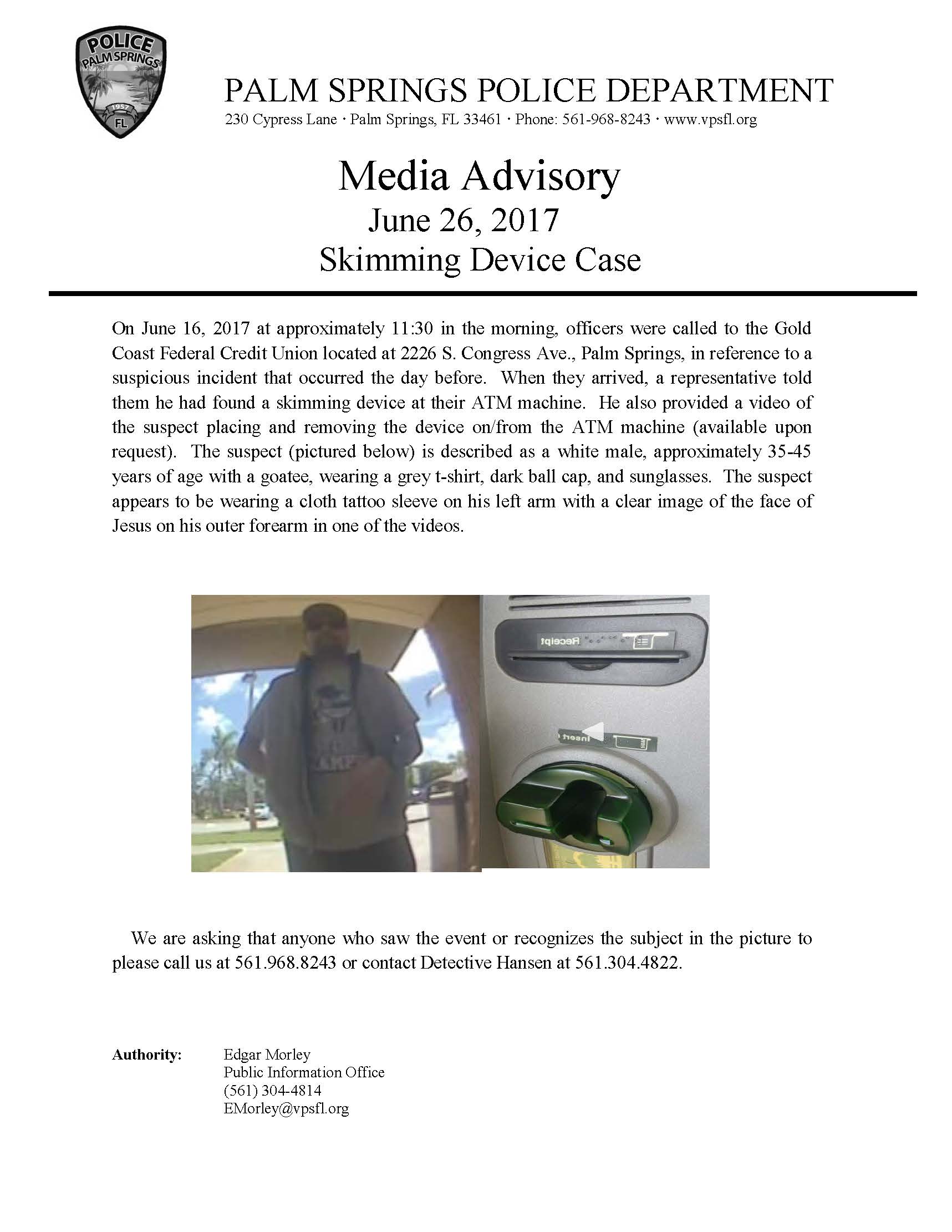 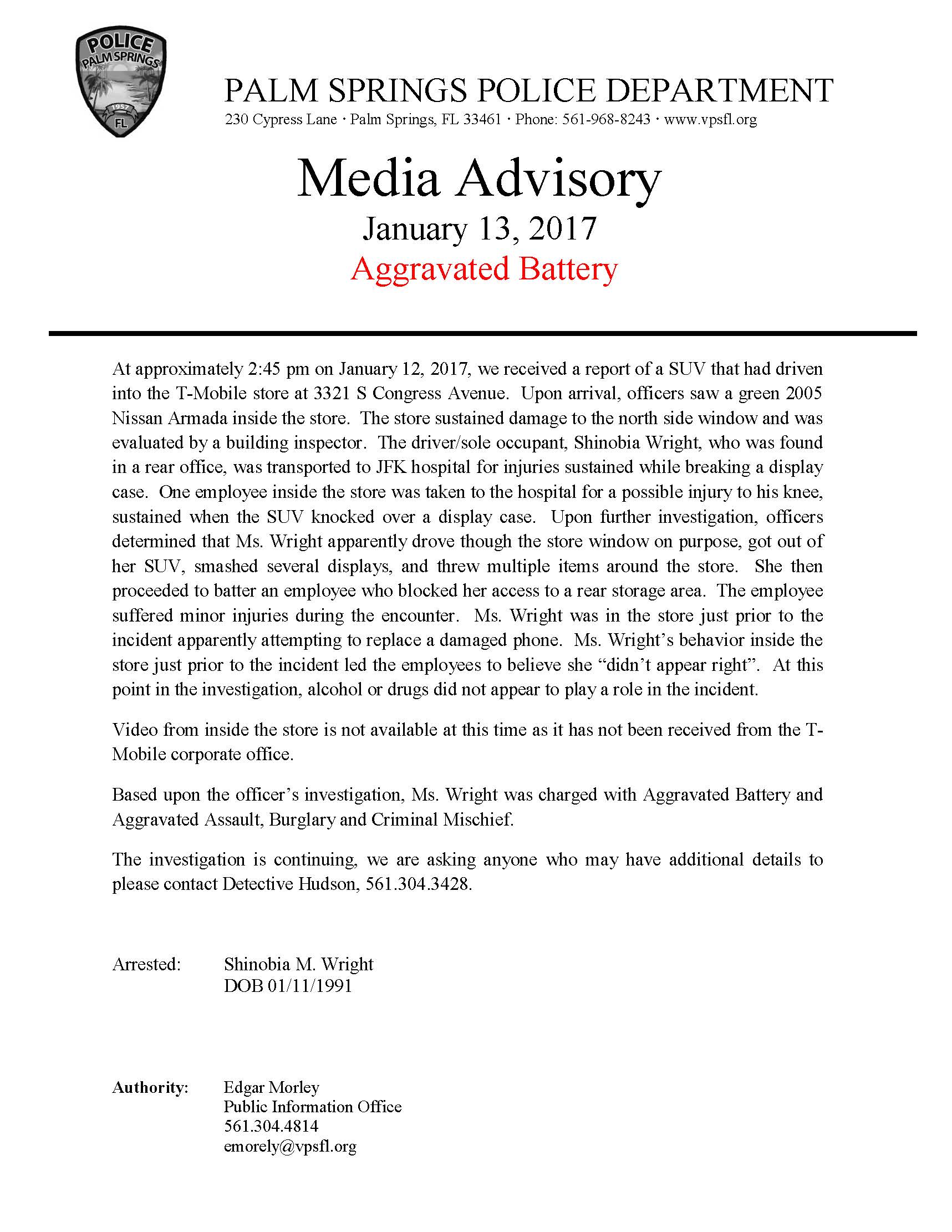 At approximately 7:50 a.m., this morning two black males, unknown description, attempted to rob an individual at Woodhaven Plaza, 4068 Forest Hill Boulevard During the event, the victim fought with the suspects and at least one shot was fired from an assault style weapon. The suspects fled eastbound on Forest Hill Boulevard in a black four door car, possibly a Hyundai or Kia. The victim was not injured during the encounter.

The investigation is ongoing.

We are asking anyone with information about this crime to please call Detective Hudson 561.304.4816 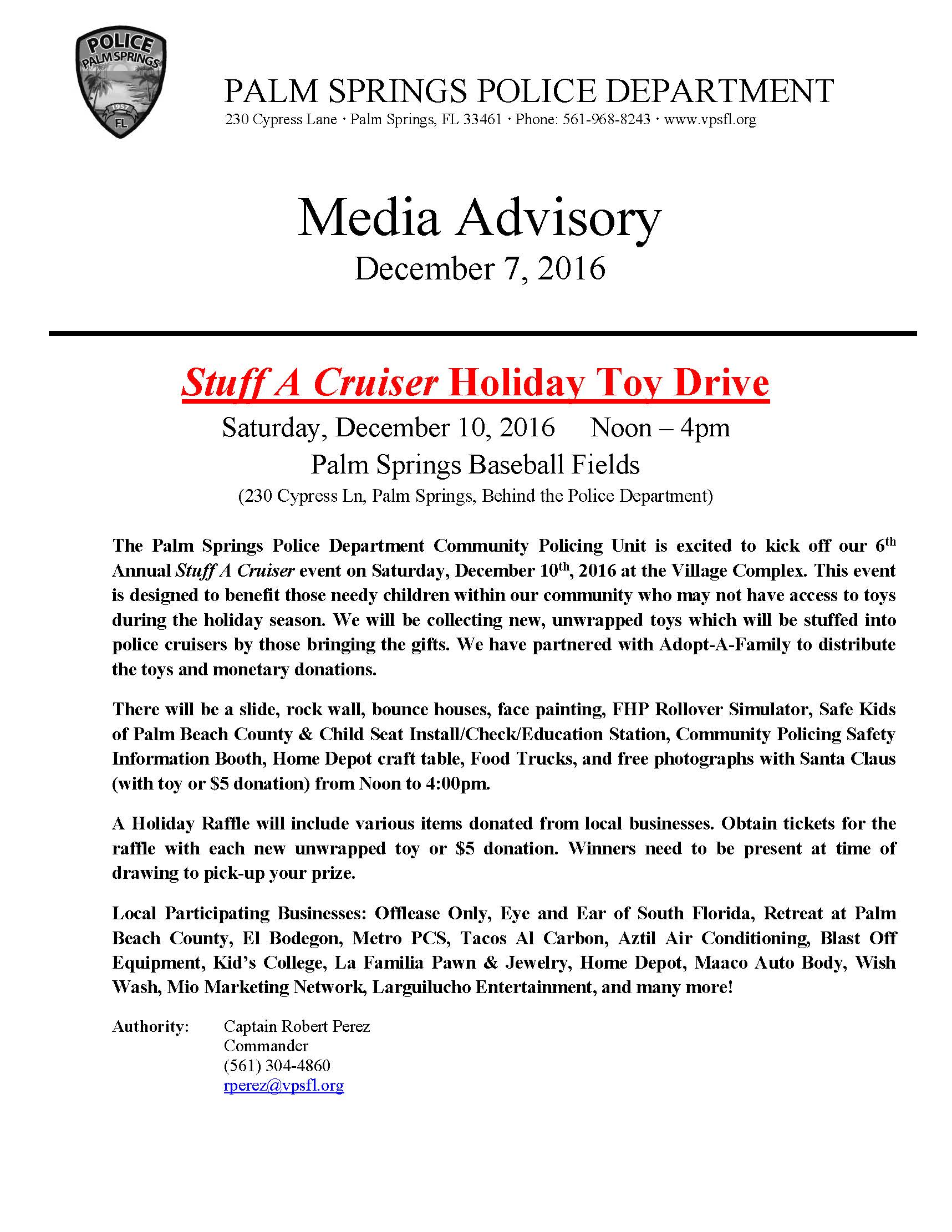 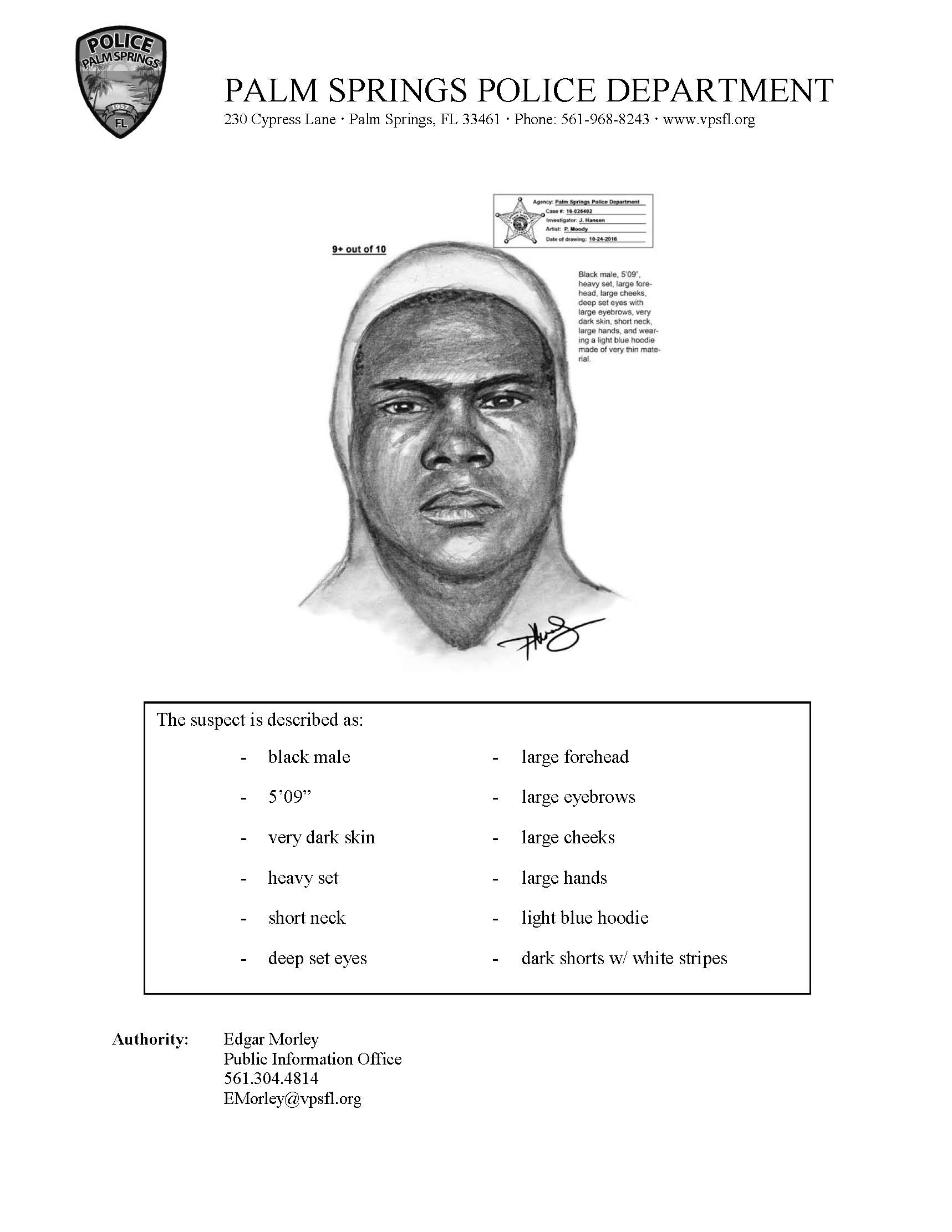 At approximately 10:25 am on June 20, 2016, we received a report of a disturbance at a residence on Almar Road Three subjects arrived the residence, and threatened to shoot one of the residents. The first subject is described as a b/m, 30's, about 6' tall, gold teeth, about 150 lbs., short twisted hair, wearing a red t-shirt, with an handgun. The second subject is a light skinned b/m, 29 years old, short black hair, 180 lbs. The third subject is described as a b/m, 25-26 years old, 6' tall, 190 lbs., with black short hair. The third subject stoodby while the first subject pushed two of the female residents out of the way while entering the residence and committing a battery on the 15 year old male resident while demanding personal property. The subjects left the residence and were believed to have left in a white convertible, which was occupied by a fourth subject described as a light skinned b/f, about 25 years old. The subjects left with one of the victims' cell phone.

On 07/05/16, Terrance Jackson (DOB: 11/15/81) arrived at the Palm Springs Police Department for questioning and was subsequently arrested for his part in the aforementioned incident. The investigation is still ongoing and investigators are still seeking information on the identities of the other two suspects involved in this armed home invasion. We are asking that anyone with information about this incident please call Detective Taylor Hudson at 561.304.4816.

On June 3, 2016 at approximately 11:30 in the evening, Officer Toussaint was conducting traffic enforcement in the 4100 block of Forest Hill Boulevard. Officer Toussaint had stopped a car and was in the process of walking back to his vehicle when his marked police car was struck from behind. The offending driver slammed into the police car with enough force to propel it several feet forward into the stopped car and ultimately into Officer Toussaint. See Press Release. 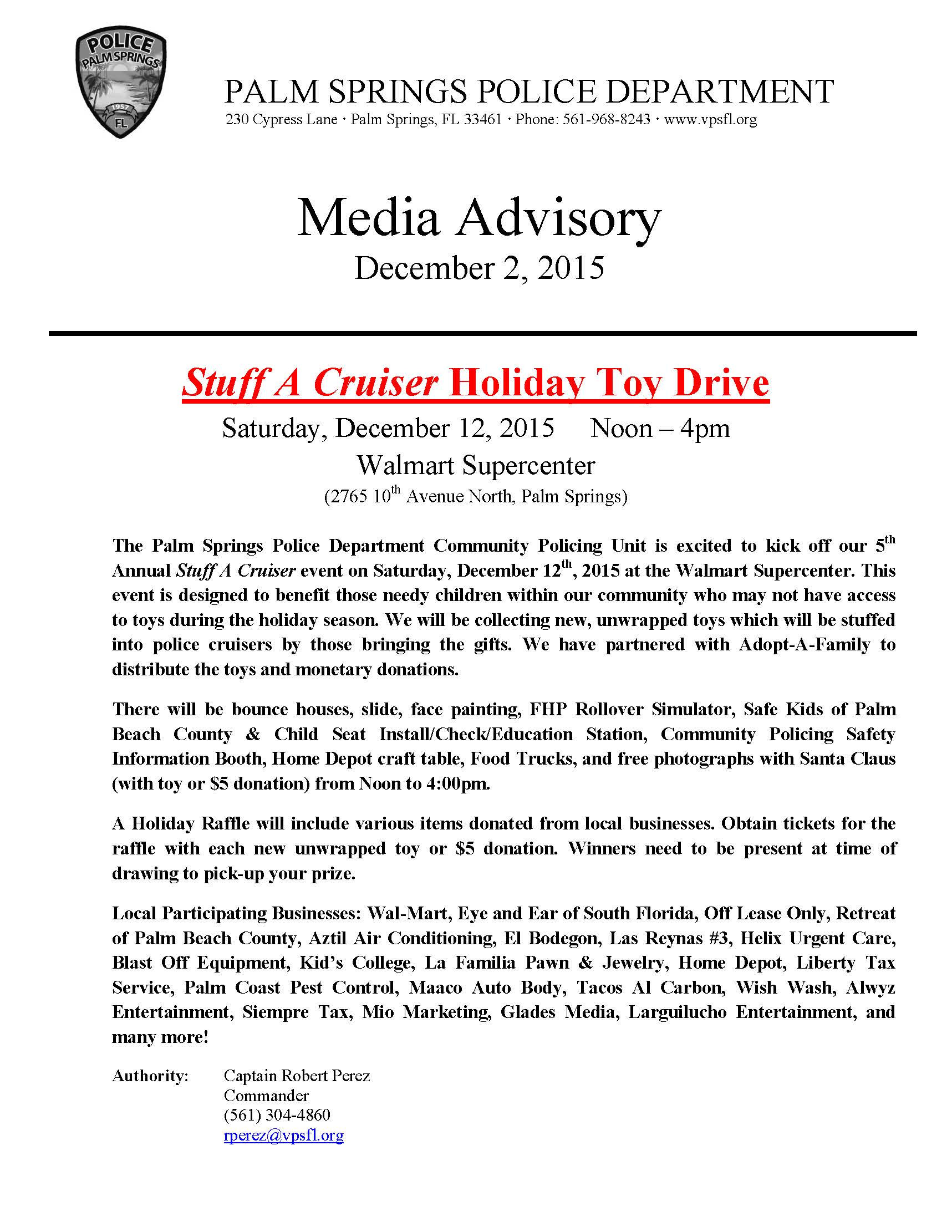 Pictured above is a person of interest in the ongoing investigation.

Anyone who can possibly identify the person standing over the victim in our shooting case is asked to contact Detective McCluskey at 561.304.4851.

On Tuesday October 20, 2015, at approximately 2:50 p.m., we received a call about a possible shooting at the intersection of 10th Avenue N and State Street. Arriving officers found Moises Gomez lying on the north side of the roadway. Mr. Gomez had apparently been shot multiple times in the lower torso. He was transported to Delray Medical Center with possible life threatening injuries. Investigators are interviewing witnesses and working on developing a suspect or suspects.

Investigators are actively seeking further information on the identity of the suspect(s) involved and/or witnesses to the incident. We are asking that anyone with information about this incident please call Detective McCluskey at 561.304.4851.

On Saturday September 26, 2015, at approximately 2:24 p.m., the owner of A & M Discount Beverage located in West Palm Beach, was robbed at gunpoint. The incident took place in the parking lot of the Wells Fargo bank at 4300 Forest Hill Boulevard. The victim was leaving the bank with several thousand dollars when two subjects wearing clown masks approached him, armed with a handgun, and demanded the cash. They fled the scene in a stolen SUV, pictured above, that was later located abandoned.

Investigators are actively seeking information on the identities of the suspects involved in this robbery. We are asking that anyone with information about this incident please call Detective Hansen at 561.304.4822. 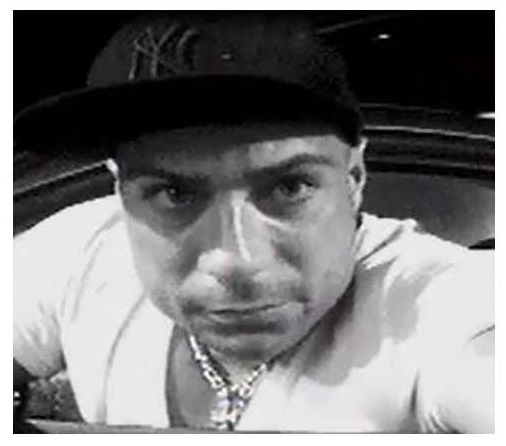 On August 7, 2015, at approximately 9:00 pm, officers were called to the Extra Storage Space located at 3599 South Congress Avenue in reference to a carjacking/robbery. The victim told detectives that he was carjacked and abducted in Deerfield Beach by two unknown subjects. The subjects then drove him to the aforementioned business and forced him, at gunpoint, to remove approximately $40,000 in U.S. Currency from his storage unit. The victim was taken back to Broward County and dropped off at an unknown location.

We are seeking to identify the person of interest depicted above so he can be interviewed by detectives.

We are asking that anyone who may recognize the person in the picture or may have any information about this incident to contact Detective Jan Hansen at 561.304.4822 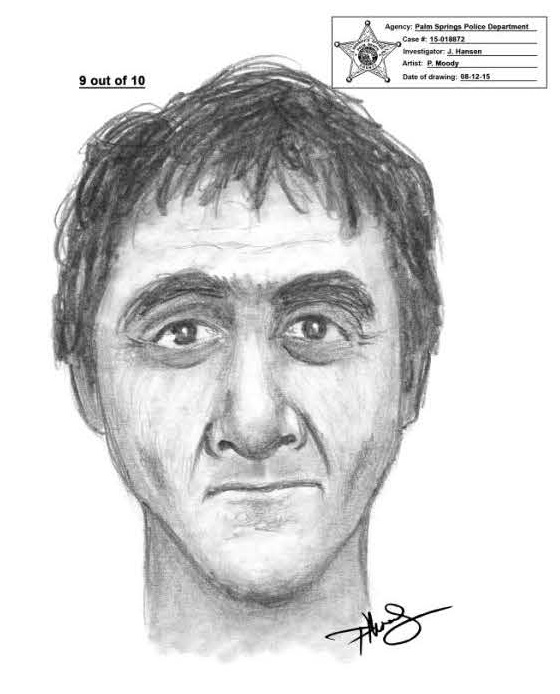 On August 5, 2015 at approximately 01:10 am, officers were called to the closed park at 226 Cypress Lane regarding a possible battery. According to the victim, she was seated on a bench in the park when an unknown white male approached her, tore off her shirt, and attempted to strangle her with it. During the ensuing struggle, the victim was able to separate herself from her attacker and he fled the area.

She described the suspect as a W/M, 5'7", dark eyes, 150 lbs, thin build, wearing a black hooded sweat shirt and dark pants. Detectives working the case arranged for her to provide a description of the suspect to a sketch artist for the rendering above.

We are asking that anyone who may recognize the person depicted in the sketch or may have any information about this incident to contact Detective Jan Hansen at 561.304.4822 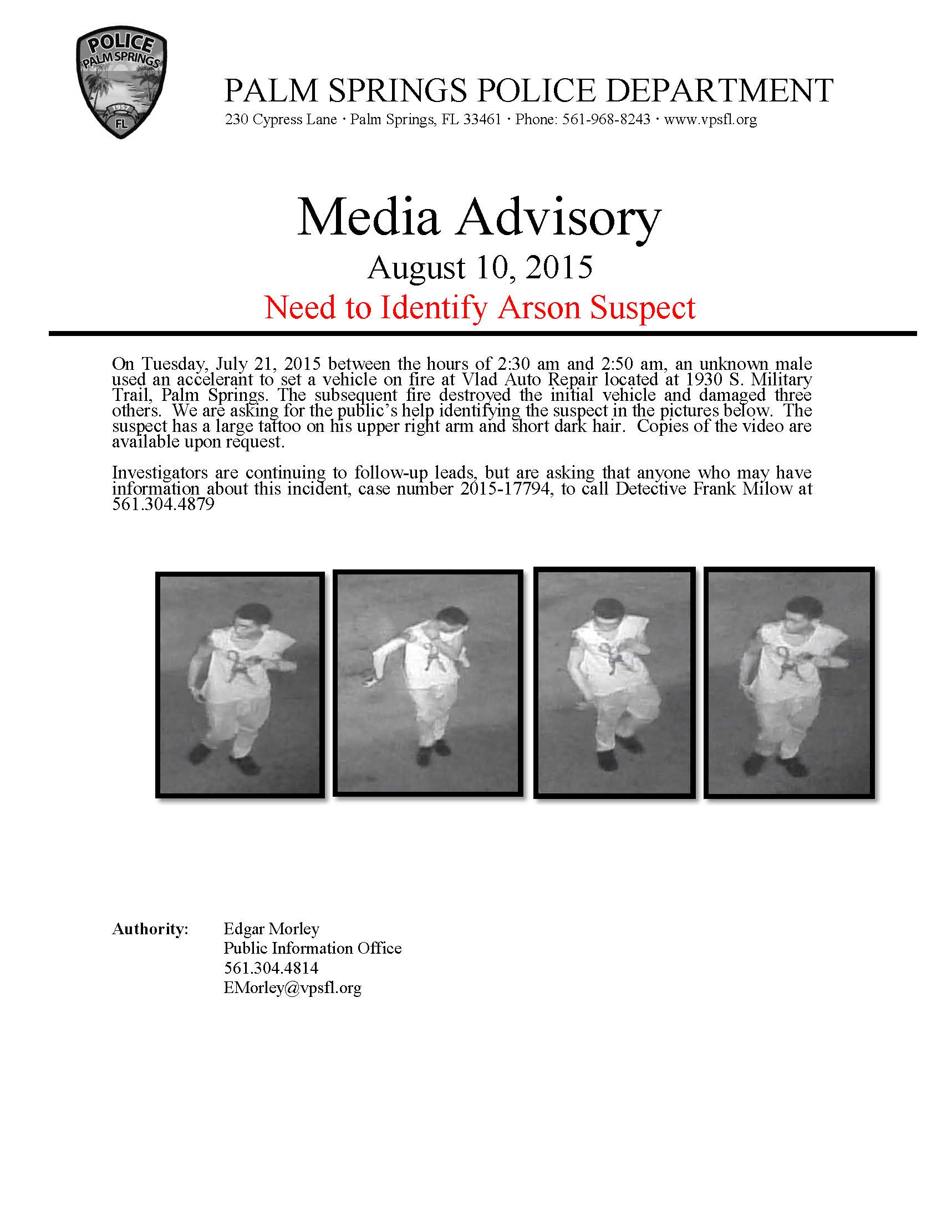 Palm Springs Officers in conjunction with the Florida Highway Patrol are investigating hit and run crash in the 3400 block of Lake Worth Road. The crash happened at approximately 9:30 pm and involved a scooter and an unknown vehicle. At this juncture, it is believed that the scooter was eastbound on Lake Worth Road prior to the crash. The rider of the scooter, a 50 yoa Black female, was airlifted to Delray Trauma Center with life threatening injuries. The road will remain closed for the duration of the investigation, drivers are encouraged to seek alternate routes. We are asking anyone who may have witnessed the crash or has information about the hit and run vehicle to contact Palm Springs Communications at 561.968.8243. 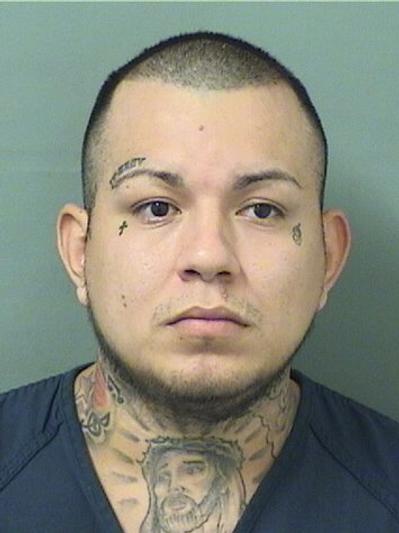 At approximately 4:00 am on, July 13, 2015, officers from the Palm Springs Police Department responded to a report of a suspicious incident and subsequent gun shots in the 3200 block of 2nd Avenue North. Multiple individuals were walking on 2nd Avenue North and encountered a vehicle that may have swerved off the road toward them. They yelled at the vehicle as it sped away. Shortly thereafter, several shots were fired and De'Andre Peyton was struck and killed.

After an extensive investigation that included questioning multiple witnesses, a suspect was developed. Last night, that suspect, Joshua Torres, attempted to turn himself into the Palm Beach County Jail. Palm Springs investigators took custody of Mr. Torres and brought him back to the Department for further questioning. Torres said Peyton and his friends "jumped" in front of his truck when he was within feet of them. He said he slowed and they began yelling at him so he accelerated away. He provided two different accounts of his actions immediately following the encounter. However, he did confirm that he went home, retrieved his Glock 9mm and walked into his backyard. His backyard is bordered by 2nd Avenue North and Elizabeth Street. He said he saw someone looking through his wooden fence, bordering Elizabeth Street, along with several other people near his white plastic fence, bordering 2nd Avenue North. Mr. Torres said he fired a shot into the air to "scare them" and then fired three more times toward the wooden fence. He further said he intended only to scare them and not injure or kill anyone. Torres said he went back into his home, put the handgun in his closet and went to sleep.

Mr. Torres has been charged with 2nd Degree Murder with a Firearm and Aggravated Assault with a Firearm. Additional charges are pending.

We are still asking anyone who may have witnessed the incident, or has any further information to contact Detective McCluskey at 561.304.4851.

The victim of our early morning shooting yesterday on 2nd Avenue North was:

We are asking that anyone with information about this incident please call Detective McCluskey at 561.304.4851.

At approximately 4:00 am this morning, July 13, 2015, officers from the Palm Springs Police Department responded to a report of a suspicious incident and subsequent gun shots in the 3200 block of 2nd Avenue North. Multiple individuals were walking on 2nd Avenue North and encountered a vehicle that may have swerved off the road toward them. They yelled at the vehicle as it sped away. Shortly thereafter, several shots were fired and one individual was struck. The injured subject was flown to St. Mary's Hospital where he later succumbed to his wound(s). Officers on the scene, via witness accounts, were able to ascertain a possible vehicle description and direction of travel. Investigators are currently interviewing several witnesses involved in the case. The identity of the victim will be released following the notification of next of kin.

We are asking that anyone with information about this incident please call Detective McCluskey at 561.304.4851.

At approximately 3:06 pm on June 30, 2015, multiple calls were received reporting a robbery at the Value Pawn and Jewelry, 4186 Lake Worth Road. Responding officers met with several employee/witnesses at the scene. According to initial reports by the witnesses, three black males dressed in all black entered the business, gave several verbal orders and proceeded to use a hammer to smash display cases. No other weapons were displayed inside the business and no injuries were reported. The suspect vehicle is described as a newer model silver Chrysler 300 with tinted windows and a clear plastic cover over the license plate. Of note is that the tint on the rear window may be bubbling up, please see the picture below.

Investigators are actively seeking information on the identities of the suspects involved in this robbery. We are asking that anyone with information about this incident please call Detective Hansen at 561.304.4822. 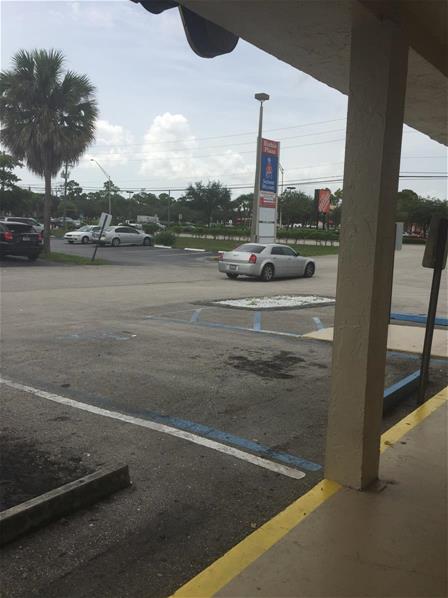